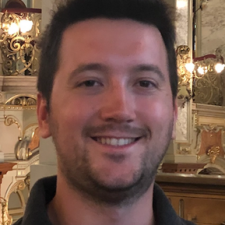 Nebih Başaran is the CEO and founder of Garawell Games, a 7-person development studio based in Istanbul, Turkey.

His game reached #1 on iOS and Android in the US – and he won a prize in the Supersonic Superstars competition.

Nebih talks about how he got his start in hypercasual game development, his experience in launching Bridge Race, and his advice for other developers looking to publish their games.

How did you get started as an indie games developer?

I started out at the Coca-Cola Company as a business Analyst in 2016. There, I met some other entrepreneurs and left Coca-Cola to found a startup in the travel and boardgame industries – and after some success there, decided to try my luck at something new.

I’ve loved playing computer games since my early childhood and I got my degree in computer engineering, so I thought to try my hand at mobile game development.

That’s when I founded Garawell Games – the studio that built Bridge Race.

Why did you decide to focus on hypercasual games?

We’re living in a time when people are consuming entertainment faster than ever before – including mobile games.

In my opinion, hypercasual is the best genre for making it as an indie in such a fast-paced environment. You can reach millions of users if the idea is unique and quickly well-executed.

Could you tell us about Bridge Race and the story behind it?

Back in 2019 I developed a game that used a ‘collecting and filing’ mechanic with a last-man standing concept, but the CPI wasn’t low enough to move beyond the testing phase.

Even after we made some changes to the game – like adding non-player characters – our KPIs still weren’t good enough to get to soft launch. Retention became an issue and no matter how many times we iterated on the game, we couldn’t get retention high enough. In the end, we had to pause the project.

Once we started working with Supersonic, we figured out how to bring Bridge Race back to life – realizing a stacking mechanic was the missing piece we needed to succeed.

Once we started working with Supersonic, we figured out how to bring Bridge Race back to life – realizing a stacking mechanic was the missing piece we needed to succeed.

We redesigned our early version of the game with a new mechanic, which is the Bridge Race you see today.

Why did you decide to publish your game with Supersonic?

Supersonic is the most exciting and fastest-growing publisher in the market today. I remember researching and meeting many other publishers before deciding to work with Supersonic, and what really stood out about them was their belief and trust in us after seeing our game portfolio.

Everyone we work with at Supersonic is also incredibly communicative and available whenever we need them – we feel like a part of their team.

Since we’re a small studio whose main goal is to publish a hit game, Supersonic felt like a perfect partner – they were very collaborative, gave us full access to our data and to industry benchmarks, and were clearly committed to helping us grow a hit game that reached #1 in the charts.

When I first started working with Supersonic, we came up with a version of the game that used a stacking mechanic we saw in other popular games. This helped us achieve great in-game metrics like retention and playtime, but we struggled with a high CPI.

So we continued to tweak the game together and work on our creatives, which helped bring CPI down from $0.41 to $0.36.

We had a major breakthrough with one of our creatives that Supersonic then refined and iterated on, helping push CPI down to $0.22 while maintaining a high D1 retention rate of 45% and a great D0 playtime of 750 seconds.

Getting CPI down 47% helped us scale affordably and reach #1 in the US on both iOS and Android – where we stayed in the top 10 for over a month.

You won a big cash prize in the Supersonic Superstars contest. What do you think helped you win the competition and what could help other game developers entering the contest again this summer?

I think our ambition was the key to our success and winning the contest. We always believed we would have a hit game, and this drive pushed us to constantly learn and improve our skills and the way we approach developing.

To reach our goals, we knew it would take hard work and dedication – all of our busy days helped us achieve the success we have now.

What advice would you give other developers trying to make it as an indie?

Knowledge about the latest technologies and trends in the industry is definitely key because that’s how you can best adapt and thrive in the fast-paced world of hypercasual game development.

For example, I have weekly sessions with my team every Thursday where we each give a 5-10 minute presentation on something we recently learned.

What trends are you predicting for the hypercasual market this year?